Outlier management is important in mineral resources estimation for precious metals and other deposits with highly skewed grade distributions. Assessing the true metal content in such mineral deposits requires special treatment of outliers. Leaving high grades unmanaged in estimation often leads to over estimation of ore tonnage and grade. The high grades may be accurate sample values; however, they may be less spatially continuous than the rest of the grades. A number of geostatistical techniques to deal with outliers in resources estimation of highly skewed distributions variables have been developed.

An approach involving ranking of the outliers has been proposed by Parker (Parker, 1991). The idea is to observe the quantile of the distribution characterized by an abrupt acceleration of the cumulative coefficient of variation and fit a lognormal model to the data above that quantile. Estimation considers a simplified indicator kriging considering that quantile as a threshold and modeling the mean of the distribution tail.

Costa (Costa, 2003) proposed a methodology for treating outliers based on robust kriging that reduces the kriging weights assigned to extreme values by editing these values using the information of the nearby data. This technique uses the kriging variance to determine an acceptable difference between the value to be edited and the weighted median calculated using the local data.

Another alternative is to move the outlier further away to a higher dimension (J. Deutsch, Boisvert, & Deutsch, 2011). A new dimension is introduced in order to measure and manage the influence of the outlier on the surrounding blocks.

A common practice is to cut the high grades to a specified maximum value. This cutting level could be determined by experience or reconciliation with production data. An alternative procedure is described here.

Simulation is a robust technique with respect to outlier values; the spatial continuity of the extreme values is not exaggerated by the local weighting of estimation. Kriging is smooth and will likely overstate the grade near outlier values. Nearest neighbour or inverse distance estimation will also give a large weight to nearby outlier values. On the contrary, simulation is designed to compute realizations that reproduce the data, the histogram and the variogram. Although the average of multiple simulated realizations is close to kriging, the average behaviour of multiple realizations may be very different from that of the kriged model, particularly near extreme values.

The steps in the proposed approach are (1) identify the outliers that may be cut; (2) use ordinary kriging or any other estimation technique to identify the volume influenced by these values; (3) use simulation to assess the expected metal content within the volume influenced by the outliers; (4) perform estimation using different cutting levels and choose a cutting level that matches the simulated expected metal content.

Prior to managing the outliers, they should be identified. The simplest approach is to choose a maximum value based on experience or past studies. Some other alternatives include:

Probability plots are useful tools to identify outliers because each data value is shown individually. The points located at the upper end of the distribution may be considered outliers. A lognormal probability plot is common; the logarithms of the grades are plotted against their cumulative probability on a scaling that would make a lognormal distribution plot as a straight line. An example is shown below. The red line is a possible lognormal distribution. The five values circled in blue are possible outliers, that is, they appear higher than expected relative to the fitted distribution. 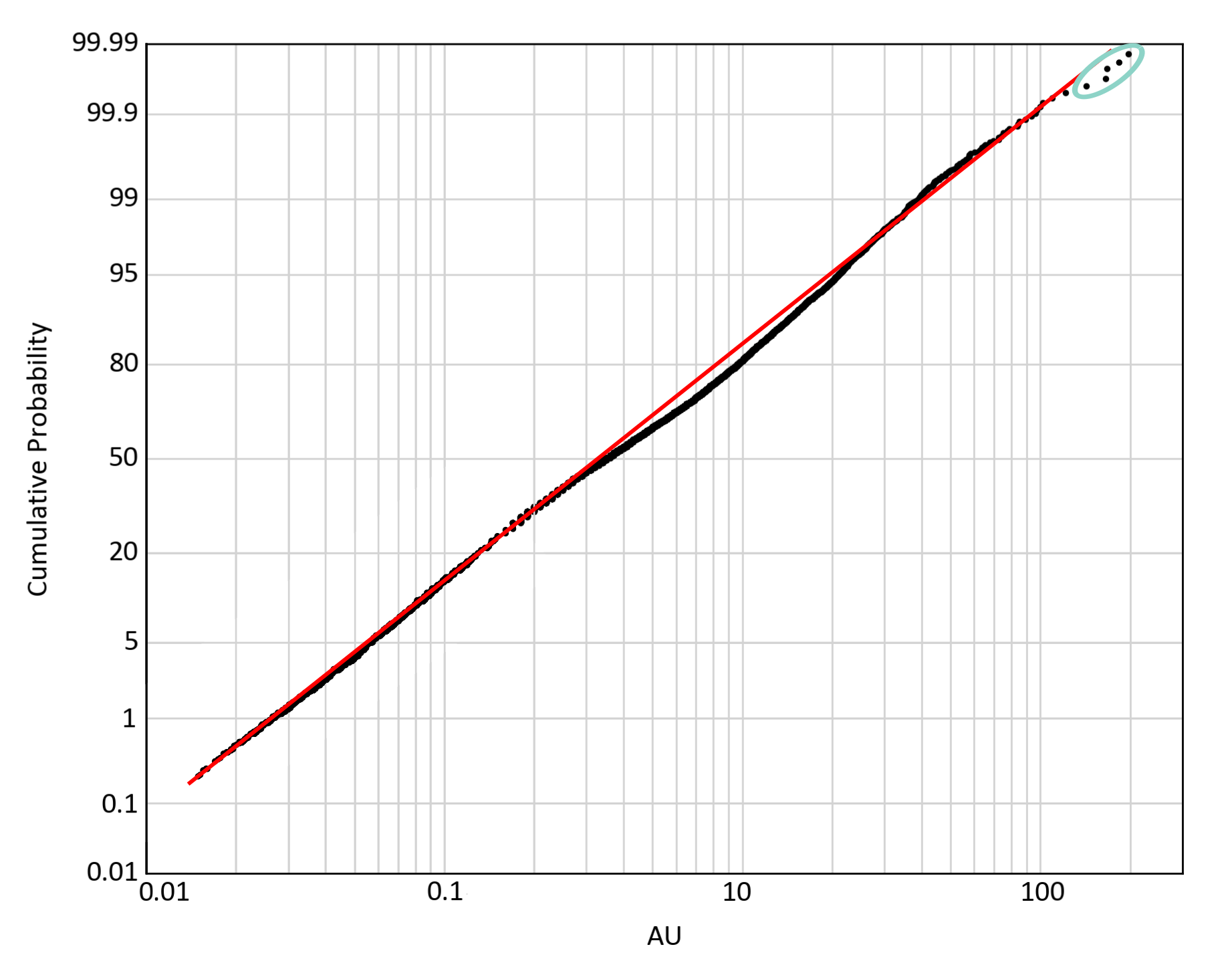 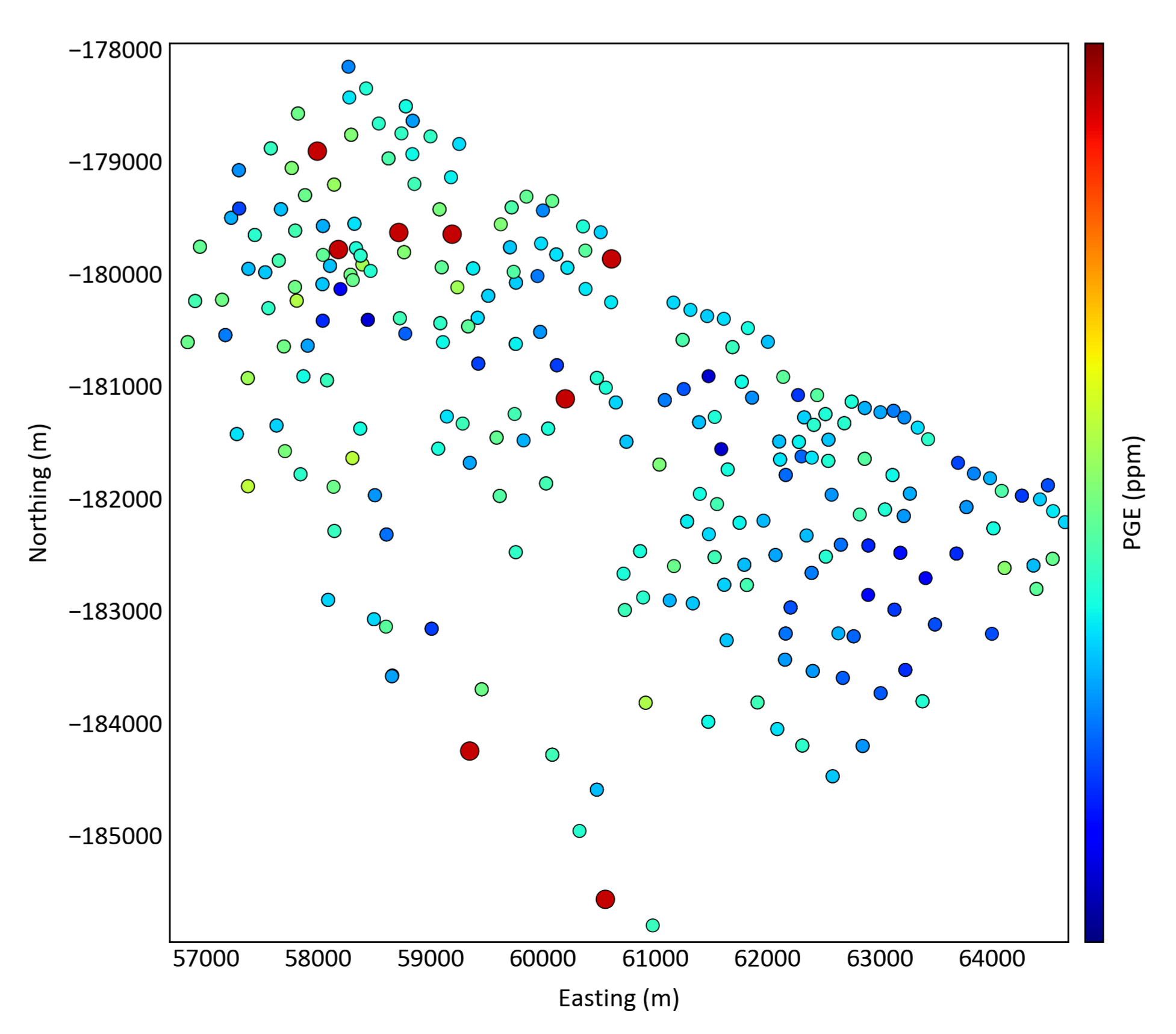 Base map that shows the locations of eight possible identified outliers in red.

Performing a sensitivity analysis using ordinary kriging is another way of understanding the outlier distribution and their impact on resources estimation. A number of ordinary kriging runs should be considered with different cutting levels. The objective is to directly observe the influence of the outliers on the estimated metal content. The table below shows an example.

The experimental variogram may also be sensitive to outliers and robust alternatives may be required. The influence of outliers on other statistics including declustering, the mean, variance and multivariate statistics should also be considered by transformation or sensitivity analysis.

Compositing is a common practice during the resources evaluation workflow. Irregular length assay samples are composited to provide equal-sized data for geostatistical analysis. In general, outliers should be identified on the original assays since some outliers are hidden when composited with other low grade assays. It would be best practice to look for outliers before and after compositing. There is no consensus view, but cutting the original assays seems more common.

Identifying the Volume of Influence

The volume affected by outliers must be identified. One approach is to create an auxiliary data variable that is 100 when an outlier is present and 0 otherwise. This new variable is estimated with the proposed estimation technique and plan. Any volume or block with an estimate different than zero has been influenced by an outlier.

As expected, the volume of influence is strongly dependant on the search radius, number of data used and other details of estimation. The map below illustrates the areas influenced by outliers for a small example; any shading by gray indicates a location influenced by an outlier. The search radius and number of data used are easily seen. Clipping to avoid extrapolation of the volume of influence along the data boundary may be considered. 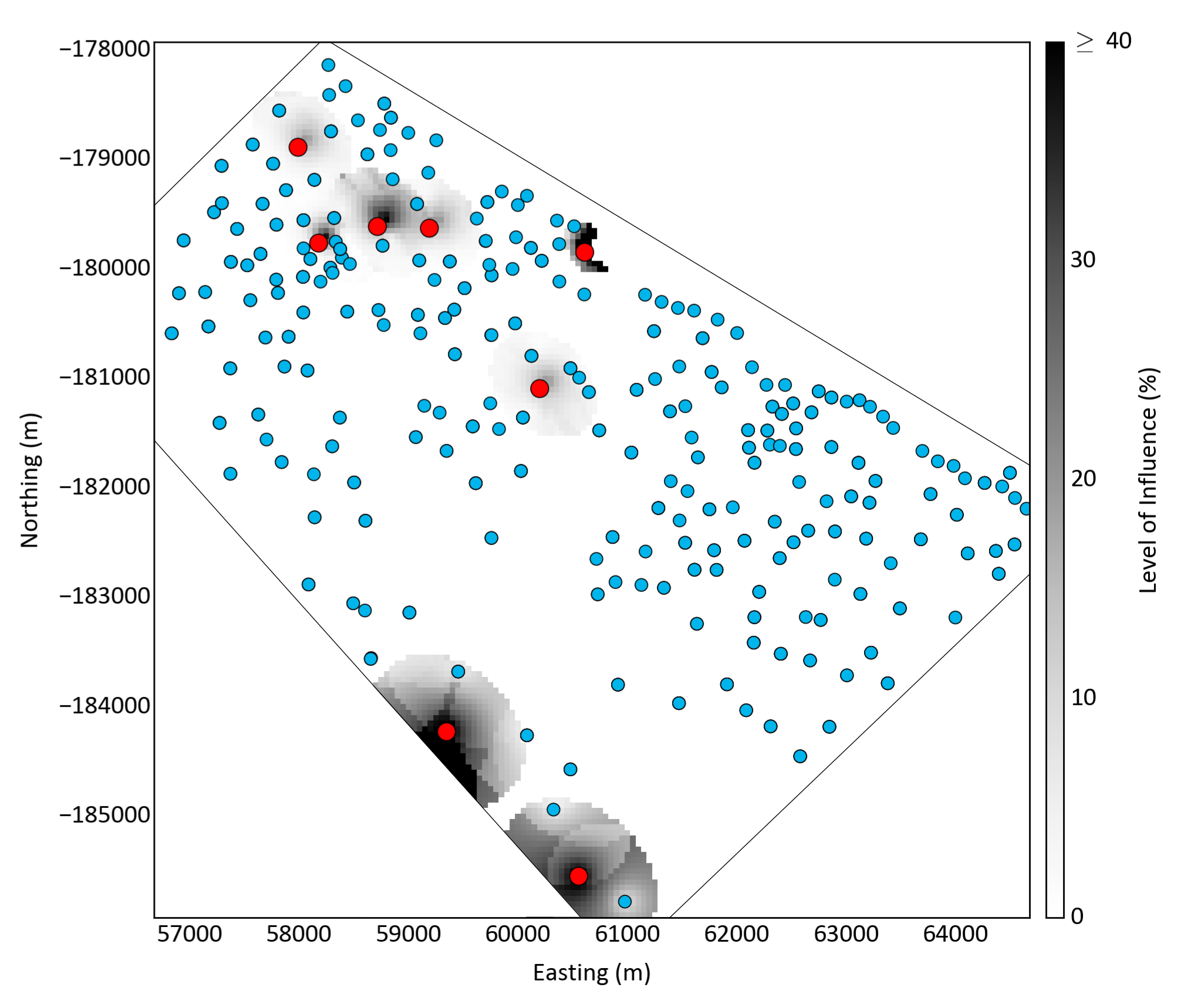 Plan view of the auxiliary data variable and volume of influence of outliers. Outliers are shown as red dots and the outlier influence in gray scale. The black thin line indicates the domain boundary used.

In the proposed approach, simulation is used to determine the uncertainty in the average grade and in the metal content within the volume of influence of outliers. Simulation is a robust technique with respect to outliers; however, outliers can have an impact on the normal score transformation that is required for simulation.

One hundred realizations are simulated to calculate the uncertainty in the metal content inside the volume of influence. The entire volume or the volumes around individual outliers could be considered. The entire volume influenced by outliers is considered here without applying a cutoff grade; this volume is likely all ore. The next step involves estimation considering different cutting levels. 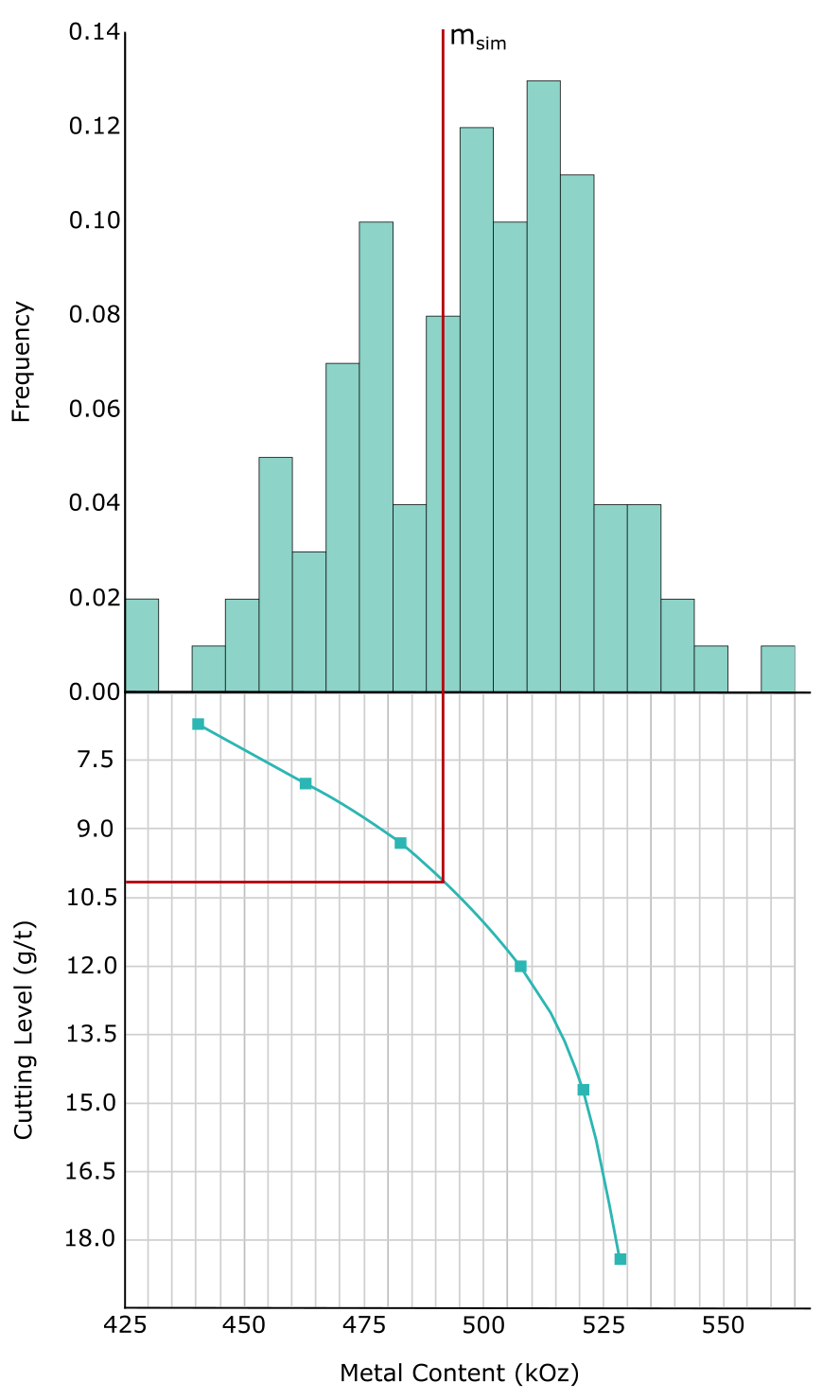 The outlier resistance of simulation can be tested by rerunning the simulation with the proposed cutting; the results should not change significantly. This procedure was done for the example above. As shown in the figure below, the uncertainty in the metal content after outlier management (red curve) is very similar to the original results (blue histogram), showing a difference of less than 5% in the total metal content. 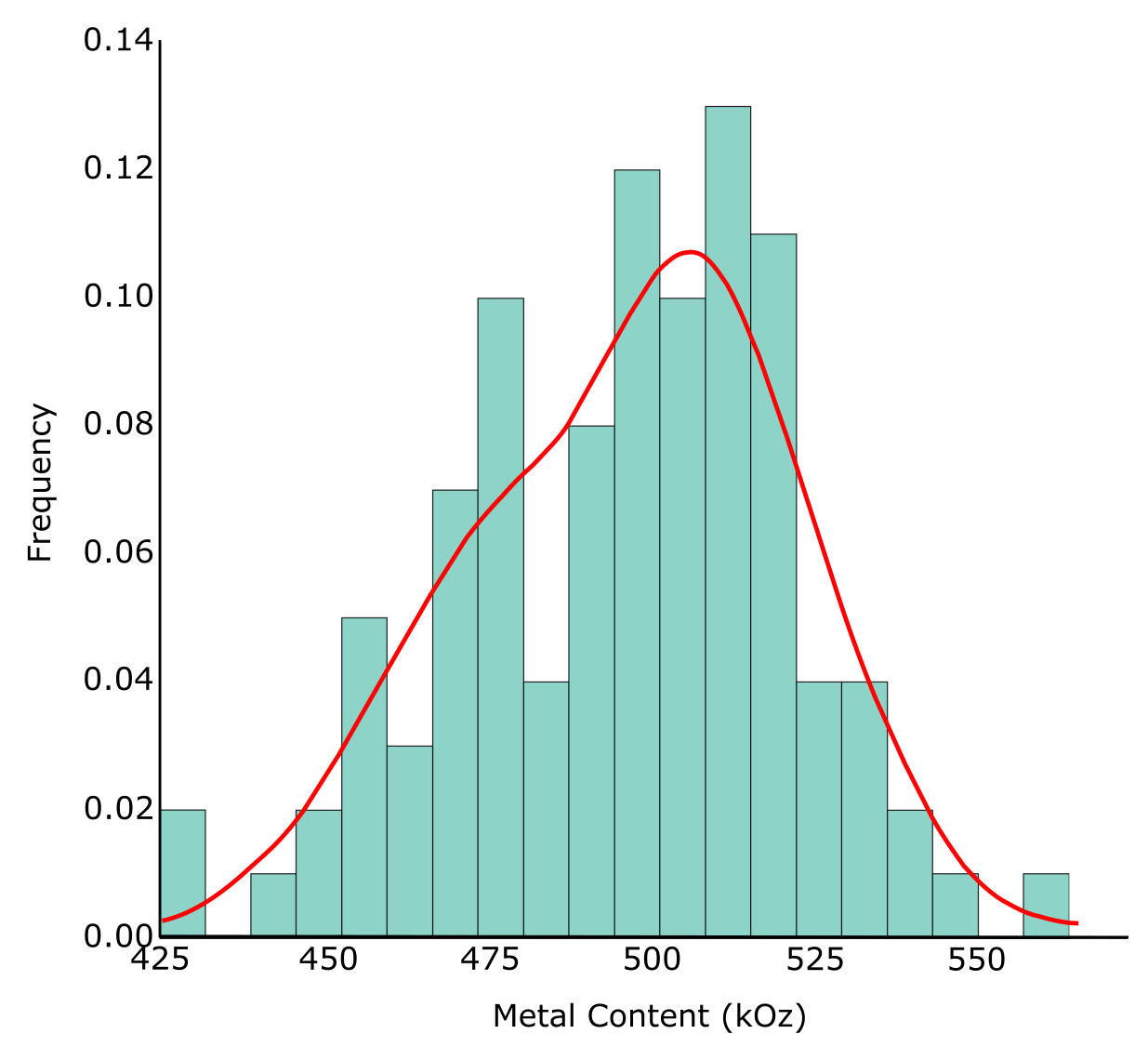 There are many alternative geostatistical techniques to deal with outliers in highly skewed grade distributions variables. Ultimately, reconciliation with production data should be considered to calibrate the outlier management strategy.