The nugget effect is affected by the volume of sampling, decreasing in value as the volume increases. The use of different drilling diameters or sample lengths for the same project complicates matters. Also, all errors in the measurement and variations in the orientation of drilling and sampling affect the variability and nugget effect (Carrasco, 2010). Compositing to reasonable support is recommended in most cases. Ensuring an appropriate QA/QC procedures and careful consideration of different data types is always recommended.

A variogram model is required as kriging and Gaussian simulation methods require a valid model of spatial variability for all distances (Deutsch, 2015), and the nugget effect is an essential part of the model.

Nugget effect as part of the LMR

The Linear Model of Regionalization (LMR) is universally used for fitting experimental variograms with a valid model. The LMR considers the regionalized variable (\(Z({\mathbf{u}})\))to be a sum of the expected value of this regionalized variable (\(m({\mathbf{u}})\)) plus a set of normalized and independent factors (\(Y_i\)) that have unique spatial variability (Wackernagel, 2003), that is, their own orientation of anisotropy, length scales and variogram shape:

The experimental variograms in all directions plus general geological understanding are used to choose the number of structures, specify the standardized variograms \(\Gamma_i({\mathbf{h}}), i=1,\ldots,nst\) and the variance contributions \(c_i=a_i^2, i=1,\ldots,nst\). The contribution of the \(i=0\) random factor or structure is the nugget effect.

The sample length affects the values and variability; the plot below shows how the variability of values reduces when the support increases. The variance for composites of 6 and 12 m reduce by 32% and 58%, respect to the 3 m samples.

Impact of compositing on the composited grades.

In the same way, the variogram plot shows how the support affects the average variability and short scale behavior. The nugget effect reduces with increasing support. Note that these variograms have all been standardized to a sill of one, which is consistent with common practice. 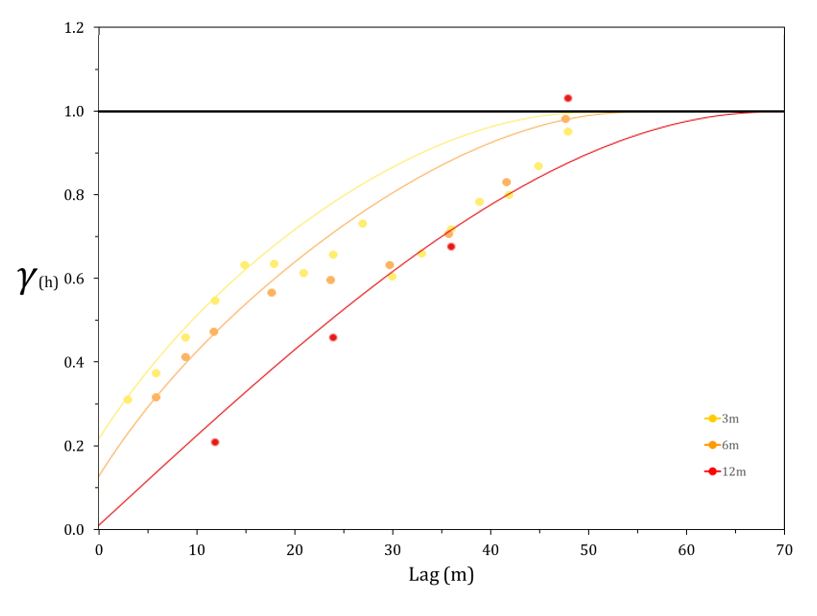 Impact of compositing on the variogram.

Consider a core sample from a vertical drill hole, which crosses different sedimentary sand layers where the darker ones are the high grades, and the lighter ones are the low grade. The size of both samples, red and blue, are the same but with a different orientation, perpendicular to the sand layers and parallel, respectively. The perpendicular samples contain a mixture of different types of sand and grades. This variability would be averaged out, and the values would be very similar. The parallel sampling does not mix the high and low values to the same extent, even there could be samples in entirely high or low grade layers. Thus, the variance of the parallel or horizontal samples is higher than the perpendicular samples. Although the geology is the same and the sample size the same, the nugget effect and entire variogram could change with sample orientation.

Schematic of sample orientation and compositing.

The variogram in the directions of greatest continuity may not be the best way to calculate the nugget effect, because the samples are often separated by large distances. Drilling is often perpendicular to the plane of greatest continuity and more widely spaced in the directions understood to be more continuous. The downhole variogram considers pairs of samples along the drill direction, which allows evaluates consecutive samples separated by short distances. 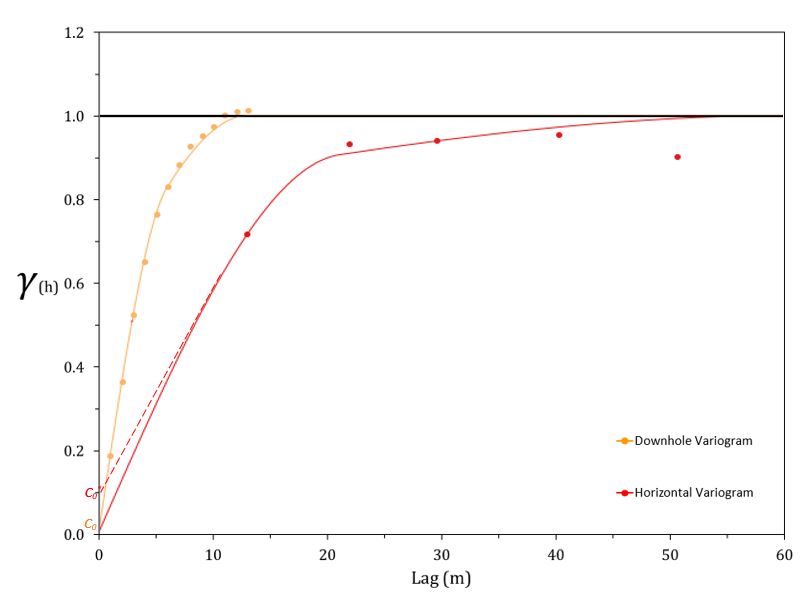 Impact of compositing on directional variograms.

There are some aspects to consider in the estimation of the nugget effect. First, a consistent drilling diameter and orientation will make the nugget effect more predictable. The length for the base sampling should be short and standardized to permit appropriate compositing, which must be chosen based on geological and engineering considerations. Systematic quality control on all the mechanical and chemical processes involved will help ensure consistent samples (Carrasco, 2010). Finally, a single low nugget constant must be chosen to fit all directional variograms.

The nugget effect estimated from blast holes or production sampling is different from that estimated with exploration drill holes, due to the differences in drilling and sampling. The blast holes have larger support than exploration drill holes. The larger support would lead to a lower nugget effect; however, the sampling procedures are often less stringent due to the nature of blast hole drilling and the large number of samples to process. Therefore, the nugget effect could be larger or smaller. Data of significantly different support and sampling procedures may need to be considered in a cokriging framework where the differences are accounted for explicitly.

The nugget effect is made up of two components, the first one and the most important is related to the intrinsic randomness of the regionalized variable. The second one is related to the sampling process, including drilling orientation, sampling support and assays errors.

The main role of the nugget effect is to fit the variogram model in all directions, although an incorrect choice could have serious implications. It has been observed that for a high nugget effect the kriging estimates will become overly smoothed, which can carry to financial losses by Ore misclassification. Similarly, should the nugget-effect be under-estimated, the kriging estimates will be overly selective, resulting in ore blocks incorrectly sent to the waste dump and waste blocks sent to the process plant (Morgan, 2011).

The support strongly influences the calculation of the nugget effect, because depending on the sampling length, the randomness can be attenuated or increased. In addition, unlike other parameters like orientation, the support can be modified easily by compositing. The orientation is another important parameter that influences the values of the distribution and the nugget effect.

The nugget effect could be estimated from directional variograms with the highest sampling density, although they may not coincide with the greatest direction of continuity. The downhole variogram may provide a high number of consecutive samples, useful for estimating the nugget effect.